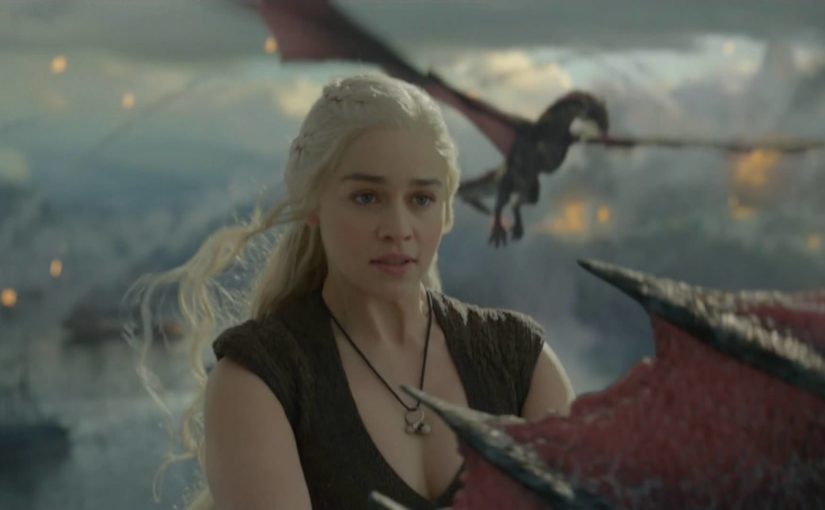 Even though I didn’t watch much of this season of Game of Thrones, I tuned in for the finale, and watched the previous week’s episode in preparation. I won’t write an spoilers, but let’s just say there were some kick ass dragon moments and while show Dany isn’t always my favorite, I really like the whole girl-will-kill-you-with-fire vibe she has. Can you blame me?

So during a specific scene, I commented that if Dany had a playlist, it would include “Heads Will Roll” by the Yeah Yeah Yeahs. Then, I had the idea to open up Tidal and start putting together something about the length of a mix tape inspired by her character. And now I can share it with you on Tidal (and a version with one different song on Spotify).

We kick it off with a song that directly references the barrier to success faced by women. Guess who’s going to shatter that? With dragons.

2. Ani DiFranco – Not a Pretty Girl

Dany basically doesn’t give a fuck if you want to save her. She is not a damsel in distress (looking at you, Jorah!). There’s also a tendency for folks not to take her seriously at first; they think she’s a naïve child with some angst: “Every time I say something they find hard to hear / They chalk it up to my anger and never to their own fear.” Thankfully, she’s found some decent advisors now, so she can blare this 90s feminist tune.

Does this song even need an explanation? Thankfully Daenerys will never be a judge on The Voice, but she will rise up and prove that a chick with platinum blonde hair can get shit done. Imagine if Gwen Stefani had some dragons.

So if you’ve tried to date or fight or deal with Daenerys Targaryen, you’d probably agree that the chorus of this 90s song speaks to her as a person:

I’m a bitch, I’m a lover
I’m a child, I’m a mother [OF DRAGONS]
I’m a sinner, I’m a saint
I do not feel ashamed
I’m your hell, I’m your dream
I’m nothing in between

Basically, don’t cross her. She has many sides, and all of them will kill you with dragonfire if you mistreat her.

Feminist revolution! Would Dany have been a Riot Grrrl? Maybe. I like to think this song is also on the “I <3 Daenerys” mix that Asha Greyjoy has obviously made by now.

The song that inspired this whole insane playlist. Since I’ve started watching GoT, I’ve seen a lot of heads roll. Just ask the Starks about that.

No one has ever cheated on Daenerys, and one could argue that she is quite the Becky herself, but she is incredibly unapologetic about giving the finger to people who try to cheat her or betray her. You might get locked in a vault, have your throat slashed, or just get burned to death by dragons. She ain’t sorry.

*On Spotify, this is replaced with Beyoncé’s “Run the World” because Lemonade isn’t on their platform at this time. It’s still pretty appropriate and could be a theme for a number of ladies kicking ass in GoT.

If you have three dragons, you’re probably a little goth on the inside. This song, from The Crow soundtrack, speaks to Dany’s feelings about Khal Drogo after seeing him (and their son) in her vision at the House of the Undying. Plus it’s called “Burn.”

This 60s psychedelic rock song begins “I am the God of Hell Fire” and it made the playlist thanks to Preston & Steve. Sometimes, when you’re burning people alive with your dragons, you just need some organ music.

Obviously we have to include something by Imagine Dragons on this mix because Daenerys Targaryen doesn’t have to imagine dragons—she is mother of them. Plus this song alludes to revolution and the apocalypse; we’re going to see some of both of those in the future, methinks.

Let’s be real, Jorah listens to this song in a dive bar while he has a shot and a beer. Dany’s playlist has it so she can have a little giggle over how weird that whole situation is.

Admittedly, I got a little lazy by the end of the playlist, but it was a fun exercise. I miss the art of the mix. We started with tapes, then CDs, then iTunes playlists—but now I can just stream whatever I want to hear or I listen to Sirius in my car. My fabulous friend Sara makes mix CDs still at Christmas, but I just haven’t felt the inspiration. So thanks, HBO. You finally did something well.*

*You did The Wire well. The only anger I have at that show is because it rips my heart out on the regular.